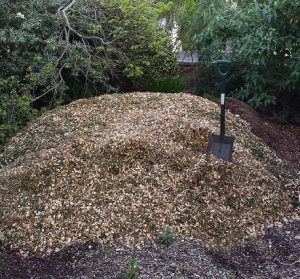 It’s Fergal up a tree

The day after I passed Fergal’s van, rain started, as it does in Ireland. If you’re a reader of my blog posts, or have read my eBook “A Wet Look At Climate Change”, you’ll know that I have a water meter in our garden. Over five days after Fergal’s promise of a load of chippings, I measured a total of 48.5mm of rain! And on one day 21mm fell. I know Fergal does work in the rain but I’m guessing when it rains that much it cannot be safe climbing trees and wielding a chain saw. Visions come to mind of a horror film; thunder, lightning, man dressed in strange gear, standing at your door, soaking wet and waving a chainsaw “It’s Fergal!”..…..

So why go to this trouble of getting Fergal to dump a pile of chippings. It all started when we first had our trees lopped. Fergal arrived in his van towing a “chipper”, as he calls it. After a couple of hours up trees and sawing away, he come down to earth and moved the chopped branches to his chipper. He had his van opened up at the back and the exit chute of his chipper pointing into the van. When he had done a few branches and I could see what the chippings were like, I had an “idea”. Shouting at Fergal over the noise of the chipper I said “can I have a word”.

In the peace and quiet and with my ears still ringing from the noise of the chipper, I asked Fergal to point the chute of his chipper into the corner of a gravelled part of the front garden. First he backed his van over to the spot I pointed to and started the motor that tips up the back of his van and dumped the initial chippings. Then he manoeuvred his chipper into place. By lunchtime the following day we had a massive pile of chippings. Fergal was very happy to do this as he told me that he has to pay to dump chippings at the local recycling centre, so it saves him a journey and the cost. 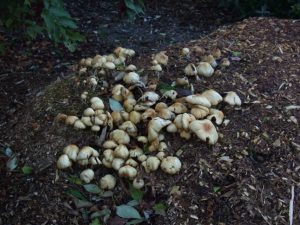 Fungi growing on a pile of wood chippings

My idea? Somewhere I’d read about using wood chip as a mulch to keep moisture in the soil and prevent weeds from shooting. Originally I thought the bags of wood chip and wood bark at garden centres were for decorative uses, but they do have another benefit as a mulch.

Of course, living in My World of Moisture and with a background in scientific training, I had to test this idea of soil moisture retention using a wood chip mulch. I planned a little experiment to set up some courgette plants, some with a wood chip mulch around them and some without a mulch. For my plan I needed to measure the amount of moisture in the soil somehow, so I bought a soil moisture meter. Before I set up my experiment I had fun going around the garden and prodding the ground with the moisture meter to see what reading I got.

Moisture in the soil

It was interesting to see that some parts of the garden were “wetter” than other parts. Where I saw higher moisture, and in some places, very high moisture, was in parts of garden that flooded during the winter. Even though we were in May and the winter storms long gone, the ground had not dried very much at all in the lower lying bits.

Extract from A wet Look At Climate Change

Without any doubt I could see from the results of my little experiment that indeed a wood chip mulch does help in retaining soil moisture. You can find all of the details and actual soil moisture results in Chapter 11 of my eBook. 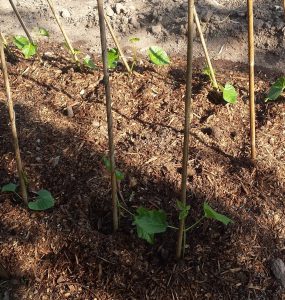 We’ve just prepared a new piece of ground for vegetables and had to move a runner bean frame to prevent it blocking sunlight to the new area. This involved turning the bean frame round 90 degrees and moving it to the North side of the new vegetable plot. Because the bean frame was placed on newly dug ground, loads of new weeds would probably appear. We used some “Fergal” mulch to stop the weeds and also, of course, to keep moisture in the soil for the new runner bean plants. Thanks Fergal!

If you would like to hear more about moisture in everyday life, please sign up for email alerts of my blogs.