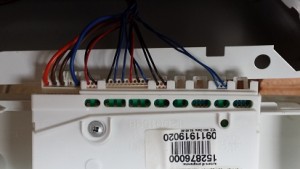 Having one of those years when everything electrical goes wrong? I’m pretty sure most of you have had at least one of these in your lifetime. Ours was over the past 12 months. I confess at this point that this article has little to do with moisture, only to say “it never rains but it pours”. Dishwasher only running for a few minutes on a run then stopping; Fan oven tripping out all the electricity when turned on; TV screen with a line down the left hand side; A burning smell when the electric shower is on. Honestly, I’m not making this up, all these things happened in the past year. Sounds like an expensive time?

Let’s take each of these one at a time in the order they happened. Decision number one. What to do about the dishwasher, which is in my opinion one of the greatest domestic appliances every invented. Therefore, essential and needed to be sorted ASAP. Do we buy a new one? That means going through the process of shopping around, much discussion on what make, model, price. Then waiting for delivery. Will they take the old one away? If not, how are we going to dispose of it? To the rescue, the power of the internet.

Searching revealed that the most likely cause of the problem was the controller box that runs the various wash cycles. Looking at the online videos and how to replace the controller, I thought, “I can do that”. Because I could not easily find one suitable anywhere locally, buying the controller and getting it delivered to Ireland was going to cost about half the cost of a new dishwasher at the lower price end. Was it worth the risk?

Another factor in buying a new dishwasher is the environmental impact, from everything that has to go into manufacturing a dishwasher and the recycling/disposal of old ones. If we could get a few more years out of our dishwasher that’s got to be worth it, and then I’d personally feel good about my small contribution to saving the planet.

Decision made. I ordered the part from eSpares in the UK and watched their video a couple of times on how to replace a controller. Replacing the controller was actually very easy. If you are thinking of doing this don’t be put off by all the coloured wiring. A great bit of advice from the eSpares video is to take a photo of the positions of the cables, which I did with my phone, and use that as a reference diagram for re-attaching them. From beginning to end, replacing the controller and having the dishwasher back in place and running, took no more than 30 -45 minutes.

Next, the fan oven. This was a much easier fix than the dishwasher. However, finding out what to fix was the big problem in this case. Every time the fan oven was switched on, after about 2 minutes, the main trip switch in the fuse box tripped out and all the power in the house was gone. Somehow we worked out that if we opened the door slightly as the oven warmed up, we could get the oven up to temperature. Then closing the door worked without the power going off. Total waste of energy, not an efficient way to heat your kitchen and completely unwelcome in summer!

We got an electrician, who was in doing another job, to have a look. He saw nothing obvious and after we put the oven back in place in worked without tripping the power. “Maybe a bit of dust or ‘moisture’ was the problem that’s been dislodged” was his expert opinion. If only! Later the same day, turned oven on and, yes, you’ve guessed, power goes out. Reset the trip and this time the power went out straightaway. Reset the trip again and this time, just for few seconds, I could see the fan at the back of the oven turning very, very slowly and the heating element was bright red, then the power tripped. 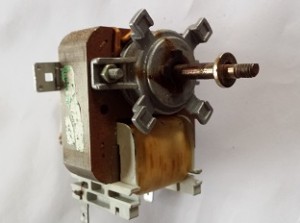 A fundamental starting point for solving any problem is to ‘define the problem’. So there it was, we needed a new fan. eSpares to the rescue again. Thanks to their video, I could see that we only had to order a fan motor and not the whole fan, keeping the cost down even more. But there were still three further hurdles to get over on this job. First, was ordering the correct replacement part as none of the pictures for the fan motor on the eSpares website were for our oven model. But after a quick phone call to a very helpful chap at eSpares the correct one was found and dispatched too Ireland. Second hurdle was getting the nut off the fan blade which you do from inside the oven. Moisture in the oven had caused some rust on the screw and I had to insert a screwdriver between the blades of the fan to stop it turning when unscrewing the nut. Third hurdle was getting the fan motor off at the back of the oven. Unlike the one in the video, our motor was not attached with screws. It needed to be twisted but would not release from the housing. I worked out that there is a spring clip that I depressed with my screwdriver and that released the motor.

No need to take a photo this time as there were only two cables both the same colour. With overcoming the small hurdles, I had the fan motor in place with the fan blade reconnected pretty quickly. Fan oven switched on at 180°C with door closed and it worked perfectly and still does after several months. Again feeling good about my planet saving contribution!

An easy fix for the burning smell associated with the electric shower. Locating the smell to the fuse box was the first step and that revealed a loose cable that had started to burn. Potentially quite serious but, fortunately with the smell leading to an investigation, we caught it early. Easily fixed by stripping back the cable and securing it tightly. Possibly the cable was disturbed when a new earth wire was run to the fuse box as a requirement for our recently installed new gas boiler. Oh yes, forgot about that one, another bit of domestic wear and tear. Old boiler just decided to stop completely when we were away for a couple of days and came home to a freezing house. Now that one did cost us quite a bit and nothing within my power, or the internet’s, could save us on that one!

Let’s not forget about the TV screen. Work-in-progress on that I’m sorry to say.

It’s not been a good year for our appliances!

I usually write about how weather, humidity and moisture affects our everyday life. If this interests you please subscribed to my blog.

Fancy a bit of cheesy fungus?