Moisture in Tea and Coffee – Part 1

Back to moisture this week specifically moisture in tea and coffee. Should we be concerned? Both tea and coffee take up moisture in certain circumstances. Have you ever thought about why in a lot of places tea bags are left out for you to add hot water, but coffee is always prepared for you? Of course there’s the marketing angle of “Fresh Coffee”, but, because of moisture, there is a very good reason why we don’t see DIY coffee……..

You don’t need to be scientist to know that tea and coffee are fundamentally different. Tea is a dried leaf, whether it’s green or black tea. Coffee is a powder made from ground coffee beans. I’ll briefly take you through the production of tea and coffee and show you where moisture is important. Starting this week with tea as this is my favourite, and, for as long I remember, I’ve drank loads of it. My mum used to say “yir a right tea jenny”, a Scottish term for one with an affinity to tea such as myself. 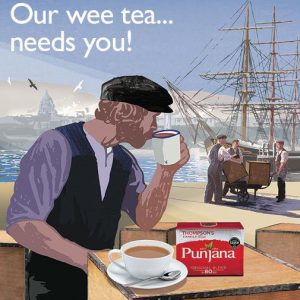 ….and I need you Punjana

My favourite tea at the moment is Punjana, a black tea mixture from India and Kenya where it is grown in large plantations on hills and mountains. Only the newly budded leaf and the next two leaves down are picked from the stems of the tea plant. As with any leaf when picked, the tea leaves begin to loose moisture and wither. This loss of moisture, about 60% of the weight, is the first part of the black tea process and is actually called “withering”. In India the bulked tea leaves at this stage are call the “dhool”.

A common term used for the next stage is “fermentation” (but not fermentation we would normally think of involving liquid and microorganisms such as yeast or bacteria) also referred to as “oxidation” which is a process involving the enzymes released by bruising. Tea as picked from the plant will have, as all plants have, a population of microorganisms. Since there is no heat treatment until the next stage of the tea process, the microorganisms will still be active and hence some kind of “fermentation” does take place. The black tea from the oxidation/fermentation stage is then dried to give the tea as we know it and packed for shipping. 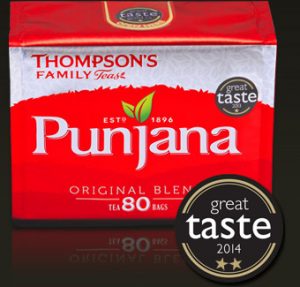 Just ready for a cuppa

Tea and moisture from the air

Now here’s where I get more technical on moisture. Tea, just like any other natural material and especially one that’s been dried, will adsorb moisture. Chemically, the substances in tea can interact with water from the air. The drying process lowers the relative humidity point at which moisture uptake occurs. In studies on tea looking at the effects of shipping around the world, I’ve seen tea described as “hygroscopic” and even “very hygroscopic”. The scientific term hygroscopic gets used very loosely. It actually means “a tendency to adsorb moisture from the air”. Whether or not that adsorption happens depends on two things. One is the equilibrium relative humidity of the substance, something I describe in Chapter 3 of my eBook, and the other is the surrounding relative humidity, described in Chapter 1. Materials that are properly described as “very hygroscopic” need special packaging for shipping to prevent them adsorbing moisture all of the time and potentially rendering them useless.

‘Hygroscopic’? I don’t think so

If tea was “hygroscopic” then you would not see tea bags left out in the open. They would quickly pick up moisture and become damp. Over the many years of keeping tea bags, and before that, tea leaves, in tea caddy’s, plastic bags and cardboard boxes, I’ve never come across damp tea. Taking from the old joke about the mean neighbours who hang their tea bags out to dry, yes, that’s possible. Just like your clothes will dry outside in most conditions except rain, mist and very high humidity, so will tea.

There is a very serious aspect to the way tea behaves around moisture. Being organic, tea would support the growth of microorganisms if enough moisture was adsorbed. All those tea bags left out and being handled by people would be a serious health risk. Moulds and fungi, some toxic, would grow causing spoilage and, if not killed by adding hot water, potentially be infectious and detrimental to human health. Thankfully, we can safely keep our tea without having to worry about it “going off”. Concerns about food safety in the supply chain have led to studies on moisture uptake by tea and publications in the scientific and medical literature. Official publications from the European Commission have looked at tea being shipped to Europe and conclude that to their knowledge there have been no reports of damage to human health from microorganisms coming directly as a result of exported black tea from the main tea growing regions.

I’m glad to say that tea is a safe food product. The situation with coffee and moisture is quite different. I’ll go into the details next week.

If you would like to hear more about fungi and the impact of moisture, please sign up for email alerts of my blogs.