The eBook, The Bad and The Nice

A mixed bag of things to talk about. An article about my eBook A Wet Look At Climate Change, a fungus called rust, and what we did with a glut of runner beans and courgettes.

A Wet Look At Climate Change

Last week I sent an article to BookBoon for their blog. I took a different approach in the article to my own blog postings. An idea came to me to write about how I structured my eBook A Wet Look At Climate Change that I first published on BookBoon in 2009. Just to briefly summarise, in the article I explain how I used the first three chapters with technical information to explain the role of moisture in the other chapters. As an example I took one of my articles on this blog, You say biscuit, I say cake! and related it to Chapter 3 of my eBook.  BookBoon obviously have a lot of blog articles sent to them as my one is not scheduled for posting until about mid-November. 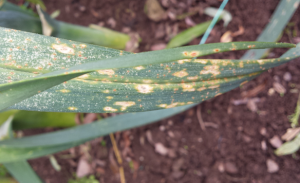 Rust fungus on our leeks

It started with our garlic plants then it moved to our onions and leeks. Patches of orange on the leaves. After a couple of weeks the leaves on the garlic became quite covered in orangey-red and then started turning yellow. A quick search on the internet and comparing pictures confirmed the culprit to be a fungal disease called Rust. Usually in August the leaves on our garlic plants turn yellow and that’s when we would lift them for drying and storing over winter. I reckon that because of rust fungus the leaves turned yellow about a month early. Having now cooked with some of the garlic, there’s nothing wrong with the cloves and they are just as juicy and aromatic as always. Due to shorter growing time caused by the rust, the size of the bulbs are smaller. This is the first disappointing year we’ve had after many successful years of garlic crops.

So as not to carryover fungal spores to next year’s crop I contacted the garden supplies outlet where we got the original garlic bulbs about 7 years ago. We wanted the same variety because of its large juicy cloves. When I contact the supplier, who are Fruit Hill Farm in Bantry, County Cork, about buying garlic, I mentioned our rust fungus problem. They responded by telling us when the garlic bulbs will be available but also came back with an explanation for the rust infection: “This year there has been a lot of growth due to the warm and humid weather after a slow Spring. When crops grow so fast they can be more susceptible and the climatic conditions favour fungus development. There is a lot more Blight around this year as well. Last year was a very steady year for growth, there were some great yields of grains and potatoes, but some of the hot weather loving plants did not do so well.”

Including Blight in their reply did not surprise me and I did see on the Met Éireann website a Blight warning. Chapter 7 of A Wet Look At Climate Change specifically covers the increasing spread of Blight fungus due to warmer and wetter weather conditions.

A glut of Courgettes and Runner Beans

Now that I’ve written about moisture and stayed within the theme of this blog, I’m going to divert a bit to a “nice” problem we have at this time of year. Arriving at the same time each year we have a peak of growth with our courgettes and runner beans. Neither of which freeze well by themselves. For the past few years we have explored ways of cooking and freezing courgettes and runner beans to deal with the glut. Just to write about something different here’s what we have done so far this year starting with some of our courgettes.

An excellent recipe for courgettes:

This is our variation to a BBC Good Food recipe where we use a much higher amount of courgettes.

Heat oven to 200°C/180°C fan/gas 6.  Grate the courgettes using a wide (side) grater. Put all of the courgettes in a large non-stick pan, no oil needed. Stir the courgettes over a high heat until they soften and the released water has mostly evaporated (courgettes starting to stick). Turn off the heat and leave to cool a bit. 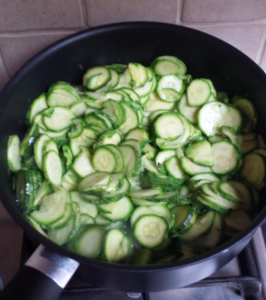 Add the flour to a bowl and season with salt and plenty black pepper. Stir in the eggs and milk to make a batter. Grate the cheddar and stir into the batter. Snip the chives with scissors (we used chives straight from the garden and I noticed there was some rust on these alliums too!). Place two tea towels, one on top the other, on a work surface and put the fried courgettes in the middle. Fold over the tea towels, roll up the courgettes to squeeze out more moisture. Add the courgettes to the batter and mix.

Heat just enough oil to give a light covering on the bottom of a non-stick pan.

Drop in spoonfuls (about 1.5 tbsp) of the Blatter mix into the pan and cook at a high heat for about two minutes. Turn over the fritters and cook for another two minutes or until golden brown. 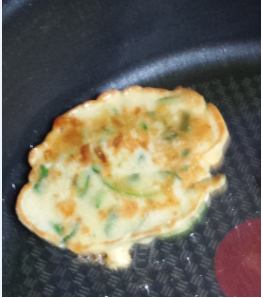 Bake the fritters on a baking tray in the oven for 8 minutes. We made 2 x 3 fritters and baked 6 on a tray whilst cooking the next 6 fritters. Total of 18 fritters. Leave to cool and freeze in bags or containers with greaseproof paper separating the fritters.

These freeze really well and can be heated directly from the freezer in a non-stick pan with a little oil as above.

We tried this delicious Runner Bean Ratatouille this year. 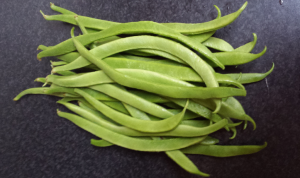 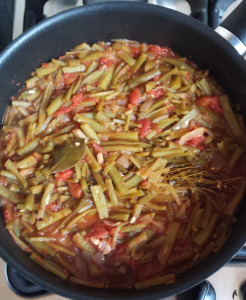 Currently, we are testing to see how well it freezes. Here’s the link to the recipe from Riverford Organic Farmers.

If you would like to hear more about moisture in everyday life and maybe some interesting and tasty other bits, please subscribe to my blog.

Welcome to my world of moisture!

Taking Care with a Chemical Fertiliser