About a year ago I posted on this blog an article that looked into what can happen when moisture gets into the oil used in electrical transformers. This was a completely new topic for me and something I had never come across before. My ignorance in this area surprised me. With the real possibility of moisture causing catastrophic and spectacular failure of transformers and loss of power supply, I thought I would have picked up on this somewhere along the way. It was, however, a webinar on “Moisture in Transformer Oils” that captured my attention. Here we are one year on and there’s been an updated webinar on the same subject that was very, very interesting and significant in a number of ways……..

I refer you to my previous post Moisture in Transformer Oil for background information. Briefly, to set the scene, moisture ends up in the oil from two main sources. Moisture moves from insulation paper, that separates each copper coil, into the surrounding oil. All large transformers use oil for additional insulation and cooling of the coils. When first setting up the transformer, and then during maintenance, this exposes the transformer oil to air, which is also a source of moisture.

Steven Jiroutek from Vaisala who presented the first webinar, updated us on new data. The new data showed comparisons of different types of oil and different ages of oil depending on how long it had been in a transformer. At first he used a well-known way of measuring the amount of moisture in the oil called PPM which stands for Parts Per Million. One PPM would mean that 1Kg (1000 grams) of oil contained 0.1g (one tenth of a gram) of water. Steven’s results were in the range 5 – 50 PPM. So you can see we are talking about very small amounts of water being present. A critical level of PPM that can cause short circuiting within the transformer is around 30 PPM.

Having informed his audience about the critical level and showing that older, or “aged”, oils can be above 30 PPM, Steven then took us into a new way of measuring moisture levels in oil. This for me is where I became totally absorbed in what he was saying. I’m not sure if I can explain this new way of measurement to you in the few words I have here, but I’ll give it a go!

A term needs to be introduced at this point to describe this way of measuring moisture levels in transformer oil. It’s a term that will be kind of familiar to regular readers of my blog, it has the name “Relative Saturation”. To understand what Relative Saturation means, you need to come at it in much the same way as getting your head around “Relative Humidity”. My eBook “A Wetter Look At Climate Change”, may be of help here. In chapters 1 and 2 there is a description of why we have Relative Humidity instead of just “humidity” and what “Saturation” means when talking about moisture.

In fact, Steven Jiroutek in his webinar said that “Relative Saturation” was analogous to Relative Humidity. To explain the link between the two terms we need to know one important fact. Both air and oil can “hold” more moisture as the temperature increases. The maximum amount of moisture is what we call “saturation” and adding more moisture is not possible without condensation to liquid water. 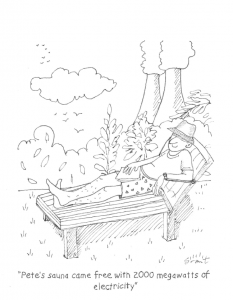 Now here’s the really subtle bit. As the temperature changes the saturation level changes. This means that the “relative” saturation changes even for the SAME amount of moisture in the air or oil! Just having a change in temperature, which transformers do all the time, changes the Relative Saturation. Cool conditions means a lower saturation level, and for the same amount of moisture in the oil, the Relative Saturation increases. Consequently, transformer oil can fluctuate from a non-critical state to a critical state according to the weather.

Steven presented data to demonstrate how Relative Saturation is a much better way to be able to tell if a transformer oil is close to, or above, the critical level. Better measurement means better prediction of failures and allows for timely preventative action.

If you would like to hear more about moisture in everyday life, please sign up for email alerts of my blogs.

In the Pink with Moisture

Water Mining – Something in the Air