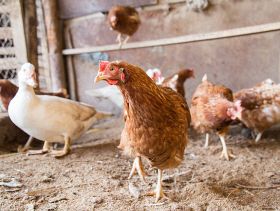 Sorry about the pun in the title. Actually this is a serious matter. Demands from a rapidly increasing human population means that food production techniques have to be maximised for efficiency. Moisture has a proven effect on the size of poultry grown in large numbers. Research on broilers (chickens for eating) and turkeys shows that their living conditions impact directly on their growth and health. Studies in the United States have estimated the cost of lack of moisture control to run into several hundred million dollars each year. But how can something that sounds so simple be such a big problem?

On first thought you would think air conditioning of some sort might be used to control moisture in the sheds where poultry is housed. Indeed, poultry sheds have to have, by law, appropriate ventilation and air circulation to protect the health of the birds. Each country has its guidelines for good poultry husbandry. These guidelines protect the birds but also protect our food supply. So where does the big moisture problem come from? 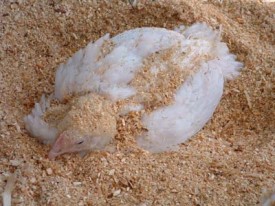 A covering of “litter” is put over the ground for the birds to use as a substitute for their natural conditions. Poultry like to scratch around, bathe in and eat grit. The litter used by poultry farmers is mostly wood shavings, rice hulls, straw, paper products and sawdust. This litter needs to be a few centimetres thick and one of its main functions is to take up the bird droppings. To function properly the litter must be loose and not caked. As the moisture level of the litter increases the fibres in the material bind together and the litter becomes matted and forms a solid cake.

Sources of water that increase moisture

Three main sources of water are responsible for high moisture in litter. One is the bird’s watery droppings. Calculations by Mississippi State University researchers on water consumption of broilers over their growth and time as an adult to be more than 50,000 gallons in a shed of 20,000 birds. Each bird excretes about 80% of the water it drinks. Another source of water is spillage from the bird’s water containers. Technology, such as nipple feeders, has been developed to minimise spillage. The third source of water in the litter is more subtle and needs an understanding of the way materials adsorb water from the air. I explain in Chapter 3 of my book A Wet Look At Climate Change how moisture interaction with materials works. In simple terms the litter naturally absorbs moisture from the air if the humidity is high enough.

Managing the natural uptake of moisture by litter is difficult for the farmer. There is no easy way to monitor the moisture level in several of tons of the material scattered over the shed’s floor. Generally, the method of moisture measurement is to take a sample of litter, weigh it, dry it until a constant weight is reached, then calculate the weight loss as a percentage. Using this approach the College of Agriculture and Environmental Studies at the University of Georgia have determined in scientific studies that a moisture level around 35% should be maintained.

Other researchers at the University of Florida also recommend a moisture level around 35%. Moisture levels higher than 35% results in fungi and bacteria growing in the litter causing threats to the health of the birds. Researchers at University of Veterinary Medicine in Hanover, Germany studying Foot Pad Dermatitis (FPD) in Turkeys, also found that the incidence of this disease increased if the moisture level of the litter rose above about 35%. FPD in Japanese broiler chickens caused by higher moisture levels has been reported in the Journal of Veterinary Medical Science, showing this to be a worldwide problem

If you have been following my blog, you may see that My World of Moisture stems from the very diverse and pervasive nature of moisture. So many things around us are influenced by moisture. Looking further into this moisture in poultry litter story, I’ll be asking the question, “Which types of fungi and bacteria grow at what moisture content?” and “At what point and which bacteria produce ammonia in poultry litter?” My first mention of ammonia in this post, but very important as a toxic gas in the health of the birds, and their human keepers!

If you would like to hear more about moisture in everyday life, please subscribe to my blog.

Welcome to my world of moisture!